Officially opened on the evening of February 4, the 24th Winter Olympic Games witnessed the sacred flame being lit here again at the National Stadium (also known as the “Bird’s Nest”), Beijing, after a lapse of 14 years. Once again, the “dual Olympic city” makes the whole world marvel with an “intrinsically romantic ceremony” presented in a “purely Chinese style” that is widely acclaimed. In this grand event, there are actually numerous romantic moments to detect exclusively for BFSUers.

Putting wings of song on children from the mountainous area

The Olympic Hymn echoed in the “Bird’s Nest” as the Olympic flag was being hoisted. Performing the anthem was “Malan Flower Choir”, comprising 40 children from the mountainous area of Fuping County, Hebei Province. The BFSUers also contributed to this performance of the Greek song.

Yezhen Qin, a Greek teacher at BFSU, had always wanted to play his part for the Winter Olympics. He was quite responsive, therefore, when learning that Greek teachers were needed to teach the Olympic Hymn. Along with Jiahao Lin, a junior student majoring in Greek at BFSU, Qin traveled to Fuping County to offer face-to-face tutorials for the children. This was to ensure they mastered the pronunciation as quickly as possible.

“The Greek language was new to these children, and our time was quite limited. So having checked what we were facing and discussed with other teachers, my assistant Lin and I decided to convert the Greek letters into the Latin alphabet. Since the children were familiar with the phonics and could speak English, this method would acquaint them with the Greek pronunciation more efficiently. Together with the music teacher, we divided the converted Latin lyrics and put them in line with each musical note. Copies of the sheet music were then printed and handed out to each member of the choir.” According to Qin, the team adapted and developed a specific teaching plan for the children.

For these children, the Greek pronunciation was difficult not only because they had never been exposed to the language before, but also for the influence of their local dialect. Qin and Lin had to be particularly clear about the tongue as well as the mouth positions when pronouncing a few difficult sounds. They would give a demonstration for the children, and correct each pronunciation repeatedly. Qin recalled, “They asked us to mark out with magnetic buttons the sounds they often mispronounced on the blackboard. When practicing the song, we tackled them one by one. Gradually, everyone became proficient.”

In getting the children used to and interested in the Greek pronunciation, Qin taught them a few daily Greek greetings in advance. He was moved by the children’s diligence as they practiced hard both in class and during the break, making sure that they pronounced in the right way. Qin and Lin, hearing the children practice Greek down the hall even after the training, felt ever more motivated and determined to show their best to the world.

Under the two teachers’ careful guidance, a group of children moved the world with pure and honest performance of unique and beautiful music of sincerity, as if they were given the wings to fly above the remote mountainous region to the broader sky.

During the welcoming session of athletes from various countries and regions, IOC board member, Valeriy Borzov, was captured wearing BFSU multilingual “Hello” scarf, cheering up for the Ukraine delegation. Lots of BFSUers felt very much excited, knowing that the scarf was sent as a present by BFSU OFA volunteers.

Among 900 and more BFSU volunteers, 204 worked for directors of each IOC department and IOC chairmen and secretaries of each member country (region), while 234 worked for the athletes delegations in the Winter Olympic villages located in Beijing, the Yanqing District, and Zhang Jiakou. In championing a community with a shared future for mankind and passing on the Olympic spirit of long-lasting friendship and solidarity, BFSU sent “Hello” series multilingual scarves to foreign representatives as presents in the hope of sending through them the blessings from BFSU and China to the rest of the world while keeping away coldness.

The “Hello” series multilingual scarf is specially designed for this Winter Olympics. The design concept comes from the theme of the 80th anniversary celebration of BFSU, “Hello, World!”. BFSU opens courses in 101 languages and the word “Hello” in these 101 languages are put on the scarf, showing BFSU’s mission of “Link China and beyond for all people” in this era and BFSU volunteers’ hospitality and professional service in welcoming friends from afar during this Winter Olympics. The scarves that encompass so many blessings were also sent to the families of all the  volunteers as gifts during the Spring Festival, extending warm wishes to each family that has contributed to the Winter Olympics.

Everyone cheered when the crystalline “Ice Olympic Rings” carved out of the “Ice Cube” slowly rose. This is defined as an “ice-breaking” session, which means “breaking down barriers, resolving conflicts, getting closer to each other and understanding one another”. The word “welcome” spelled in multiple languages then appeared in the center of the “Bird’s Nest”, demonstrating Beijing’s warm welcome to athletes from all over the world. The authentic expressions in a variety of languages represented not only the enthusiasm of Beijing as a “dual Olympic city”, but also the sincerest greetings of the Chinese people to the guests from all over the world.

The amazing appearance of dozens of languages delighted all the BFSUers who watched the opening ceremony. While looking for the languages they were studying, volunteers from BFSU were surprised to find out how well the BFSU culture fitted into the scene. 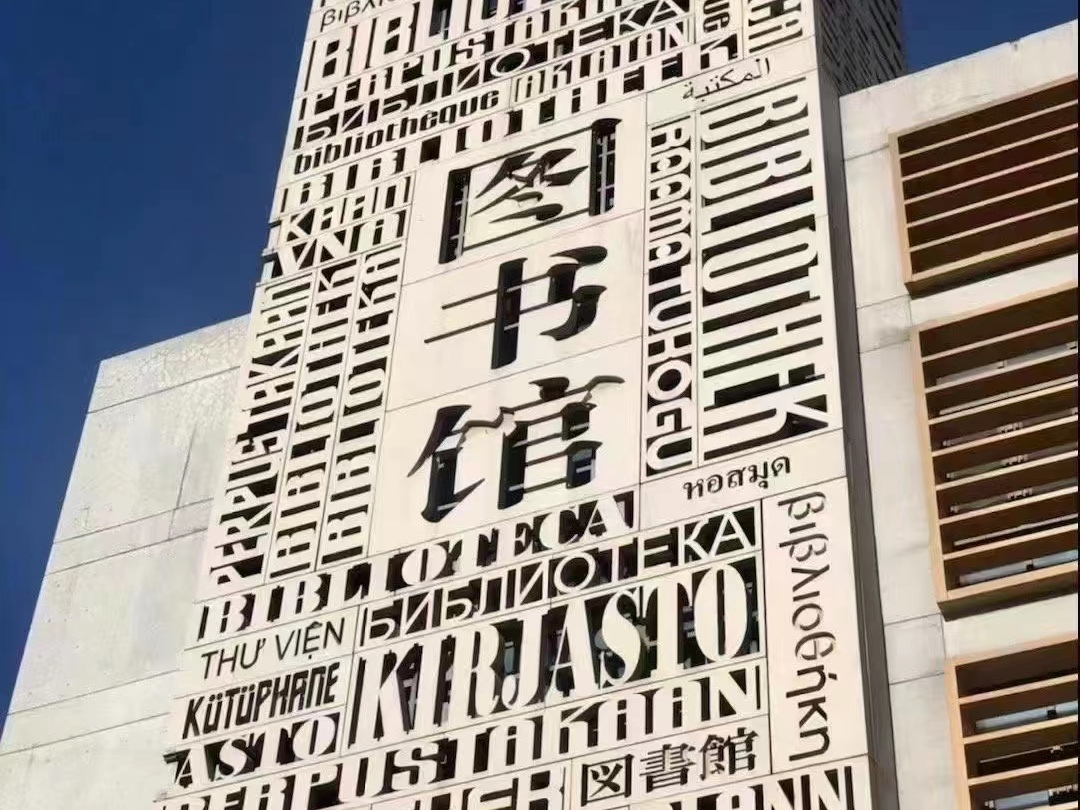 The widely applauded multilingual decorative BFSU library’s facade, the World Language Museum and the newly completed “infinity” sculpture for the 80th anniversary on the West Campus, all embody multilingualism perfectly. These multilingual elements, which can be found everywhere on the campus and have been integrated into the blood of BFSUers, are now given a special sense of sanctity on the stage of the Winter Olympic Games. These elements not only show the appreciation and recognition of diverse cultures in China, but also make every BFSUer understand more deeply their noble mission of bridging the world. We will have a deeper understanding and a more determined pursuit of the spirit of our university motto “learn with an open mind to serve a great cause”. Each language carries our desire to connect China with the world and promote multicultural communication and integration.

The Beijing 2022 is not only a sports event, but also a stage to present the solidarity of the humanity and the interplay of multiple cultures. BFSU offers a converging stage of world languages and the meeting point of diverse civilizations. The BFSU elements in the opening ceremony are the romance, sense of gain and pride that every BFSUer wants to dedicate to the world. They inspire BFSUers to use their professional skills to do a great job in telling the China’s story to the world. BFSUers have made contributions to the Beijing Winter Olympics in different ways, building bridges among world civilizations. Let every BFSUer do their bit to support the Winter Olympics and strive together for a shared future!