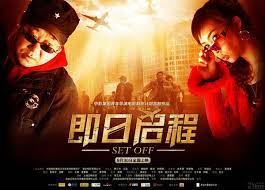 即日启程 – Jiri Qicheng – Set off (119 min) (Subtitles : ONLY ENGLISH) – Director : Liu Jiang Starring : Fan Wei et Ju Wenpei The movie tells the story of a honest and caring overseas Chinese Lao Cui who has just returned to china to finalize his divorce with his ex wife with whom he was trying to settle in Cyprus where he runs a small restaurant but even after working so hard he was never been able to afford the place forget about bringing his wife over there and during his frequent trips between his hometown and Cyprus increased his marital problems and his marriage comes to an end. Movie begins when he comes to China. The moment he lands in China his problems starts, first his wife lefts him in front of his eyes which another man. With breaks his heart and suddenly he receives the news of his shop being sold to some other competitor in Cyprus if he does not reach back there and make a timely paperwork or payment to the actual owner. So he has to rush back to Cyprus asap after finalizing his papers for divorce. He meets with his old friend who is a small time actor who happens to be well connected with directors and star casts given his somehow less known movie appearances. Both guys talk and departs and Cui decides to head back to the airport so that he can catch the return flight to Cyprus and hires a taxi but before jumping into taxi a half drunk girl comes from behind and puts a knife on his throat and threatens the taxi drives to take her somewhere safe so that she can avoid the two men who are pursuing her for something which is of worth something; but the taxi driver refuses so Cui being a nice guy ask the taxi driver to do so. He drops the girl at her apartment but she accidentally leaves him outside and fell asleep. And then things starts to take unexpected turns when after dropping the girl at home he is left outside with all of his luggage left inside the apartment of this girl Xia. So the things happen after that makes you laugh like hell and also enjoy the bittersweet moments arising out of unusual situations.

Please bring coins for the activities, we do not accept cards.